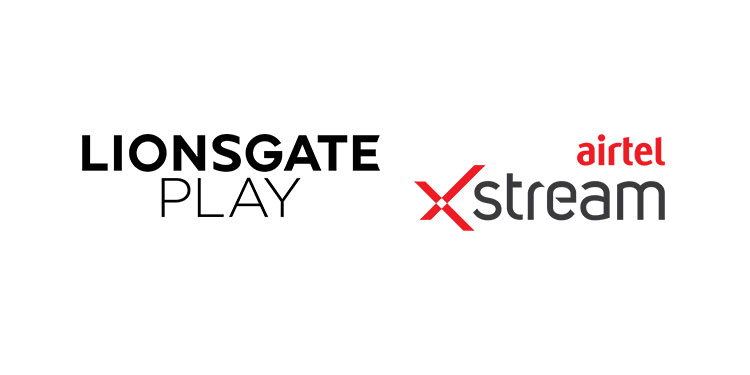 Airtel Xstream Box makes any TV a smart TV. Customers get access to all LIVE TV channels plus the best of video streaming apps effectively eliminating the need for multiple entertainment devices at home. This Android 9.0 powered smart box comes with an intelligent remote supported by Google Assistant voice search, access to thousands of apps on Playstore and also offers online gaming.

This association is the result of Lionsgate’s growing consumer base and distribution in India. Through this partnership, the fast growing base of users of Airtel Xstream Box will have easy access to premium Hollywood content by Lionsgate Play on the big screens in the comfort of their homes. This will include multiple hours of Ultra HD content, complementing Airtel Xtream’s extensive high-quality programming.

Lionsgate Play is one of the leading OTT players that offers wide ranging high-quality English content in India. The premium OTT service completed one year of its operations in India this August and has witnessed tremendous growth in the viewership each passing month. Since the lockdown, the audience are watching premium Hollywood content on the big screens at home resulting in increased consumption of Hollywood content in English as well as in their preferred regional languages. The partnership will give Airtel customers access to a deep portfolio of Lionsgate Play content on the Airtel Xstream Box. This exclusive partnership between Lionsgate and Airtel enables Lionsgate Play to showcase blockbusters including titles such as John Wick, La La Land, Knives Out, Twilight in Hindi, Marathi, Tamil, Telugu, Kannada, and Bhojpuri also to reach out to regional language cinephiles. In addition, viewers can now enjoy movies from various genres – action, thriller, horror, comedy, drama and documentaries.

Commenting on the partnership, Mr. Rohit Jain, Managing Director, Lionsgate South Asia, said, “We launched on Airtel Xstream app in Jan 2020 and since then we have seen an exponential growth on stream counts. We have been continuously strengthening our already robust catalogue with horror, comedy, drama, action & thriller movies. We recently premiered Rambo: Last Blood and were overwhelmed with the consumer response.

To be a key entertainment player in India we see following important levers: Availability of curated High quality Hollywood Content that world is watching, localization in Indian languages to increase Relevance and Strengthening our distribution to solve for Reach. Keeping the Indian audiences love for Hollywood in Indian languages in mind we always make our movies available in local languages like Hindi, Marathi, Tamil, Telugu, Kannada and Bhojpuri and will continue to invest in quality dubbing to make premium content accessible to the length and breadth of the country. We will also keep strengthening our distribution and are very excited to extend our offering to additional consumers via the Airtel Xstream Box. With this partnership our content will find its place on large screen TV at home, and the experience of watching premium content on the big screen is unparalleled”.

Sunil Taldar, Director – Homes, Bharti Airtel said: “We are delighted to deepen our partnership with Lionsgate and bring their premium content to more and more customers through our digital platforms. Airtel Xstream Box continues to see growing adoption as customers discover the joy of hybrid TV experience through one device and enjoy the best of OTT content with linear TV.”

Airtel Xstream TV Box is priced at Rs 3999 for new customers and existing Airtel DTH users can upgrade to the Android box for just Rs 2249. The box also comes included in all Airtel Xstream Fiber plans. For more details https://www.airtel.in/xstream/box.

Lionsgate Play, a premium streaming service from Lionsgate India and Starz, offers curated Hollywood content for Indian consumers, with much of the content available in multiple Indian languages. Lionsgate India, one of the most recent entrants in the South Asian market, distributes premium content to linear and digital platforms across the region. It develops and produces original local Indian language content as well as adaptations of globally successful content. Starz, a Lionsgate subsidiary, is a leading global media and entertainment company that produces and distributes premium streaming content to worldwide audiences across subscription television platforms. It offers subscribers more than 7,500 distinct premium television episodes and feature films, including STARZ original series, first-run movies and other popular programming.