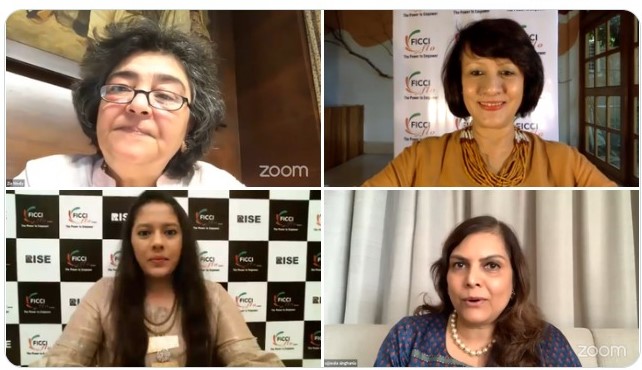 Mumbai, 11th July 2020: Legal luminary, Zia Mody shared her journey and experience while establishing herself in the legal arena alongside the male counterparts. She managed to earn trust, build credibility and rise to the top, all the while balancing a very demanding career and her personal life. Zia discussed about her marvellous achievements as a one of the foremost Indian lawyers in a candid conversation with FLO, the Women’s Wing of FICCI. This was the first interaction under the “Eminent Women” series started by FLO.

Zia Mody is a founder & Managing Partner of AZB & Partner and daughter of former Attorney General of India Soli Sorabjee. She grew up seeing her father as a lawyer and at the age of 9 years only she decided to become a lawyer. She decided to study law outside India. After coming back to India, lot of multinational companies gone back including Coke, and they only returned to India when Manmohan Singh opened the economy, which was very exciting for her.

When she started her practice, there were very few women who stood up in the in court to argue. “We worked with integrity, passion and of course you have to be intelligent. In the first 5 years we didn’t had any Indian clients, we decided to be modern and payed higher to our people to get the best talent”, she said.

Zia said “Being a woman, success is not easy and being a mother of three children, I know how multitasking can be so challenging. I got all my motivation from the women in my life, my mother-in-law, sisters-in-law and my own mother”.

She got inspiration to write her book “10 Judgements that Changed India” by Shobha Dey. She also recalled cases of Indira Gandhi, Palkhivala, Shah bano and Judgement of Justice Verma, which later became the law for sexual harassment.

Jahnabi Phookan, National President FLO said, “FLO has initiated Eminent Women Series this year, to create an inspirational learning platform for the pan India members. We aim to make a difference by creating an opportunity to interact with eminent women leaders like Zia Mody, to learn from their experiences, help face challenges better and bring out the leader in them.”

The session was moderated by day Chair Dr Aarti Gupta, Chairperson of FLO Kanpur Chapter along with other FLO members as active listeners.

FLO is the women wing of the Federation of Indian Chamber of Commerce & Industry (FICCI). FLO was established in 1983, as a division of the Federation of Indian Chambers of Commerce and Industry (FICCI) which is the apex body of industry and commerce in India. FLO has been promoting entrepreneurship and professional excellence among women through workshops, seminars, conferences, training and capacity building programmers etc. As an All India Organisation for women, FLO has 17 Chapters pan India – Ahmedabad, Bangalore, Bhubaneswar, Chennai, Coimbatore, Hyderabad, Indore, Jaipur, Kolkata, Lucknow, Kanpur, Ludhiana, Mumbai, Northeast, Pune, Amritsar, Northeast & Uttarakhand, with its Head Office in New Delhi.  Its members comprise of entrepreneurs, professionals and Corporate Executives.